“I’ve been using twitter for a while and haven’t sold anything yet.”

“I send about one tweet a week but haven’t had any response.”

“It takes me ages to work out what to write in a tweet.” 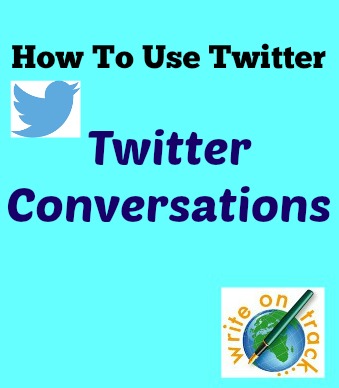 This are some of the comments I often hear at the start of social media training. Do you empathise with any of them? Have you ever felt like that? Are you wondering how to use twitter, how to have a twitter conversation, how to sell within a tweet?

The truth is that twitter is about being sociable, it’s not about direct sales.  It’s where you have conversations, where you can answer questions to show your expertise, it’s where people can find out more about topics they are interested in, perhaps going on to purchase your product or service. I’m going to share a recent twitter experience with you to demonstrate how twitter is about having chats with like minded people to build relationships and yes, often for mutual benefit.

I use my @IrishFarmerette twitter account to promote my book about farming. During the summer of 2013, I used twitter to promote my crowdfunding campaign which involved sending out many ‘call to action’ tweets. I was very conscious that I didn’t want potential pledgers to look at my tweets and see a list of ‘please pledge’ type tweets. That meant I engaged in many conversations on twitter, I wanted to be seen as chatty and friendly, as well as knowledgeable about my subject area.

A couple of weeks ago, I met another self published author on twitter. As a farmer’s wife, she bought my book. I was genuinely interested in her just-to-be-published fictional novel and purchased it, saying I would also review it on my blog in a couple of weeks. We have plans to meet for coffee to share experiences of farming, writing and self publishing and I know from experience we will learn tips from each other as well as exchanging PR contacts.

@IrishFarmerette @kpowerauthor Karen I told you #twitterverse a great place. Best of luck with Launch. Keep me a book. Will see you soon x

This came about because of a twitter conversation. I was busy writing a Nativity Play one day, one in which Joseph and Mary are using a Sat Nav which inadvertedly brought them to the wrong Jerusalem (the village near Carlow town) and from there they had to travel up to Crettyard (our village) to the portkey there! My tweet mentioned Crettyard and a mutual twitter contact picked up on it and tweeted us both, including a link to Karen’s recent blog post where she had judged a Strictly dancing competition organised by Crettyard GAA. Small world!

People buy from people and twitter makes your business much more personable. Don’t be afraid of it or believe that each tweet has to be perfect.  It helps you to have conversation with like-minded people, with those who are interested in similar topics or even your product. Twitter isn’t about direct selling.