Home › Blogs › Crowdfunding Campaigns: It’s All In The Reward

Crowdfunding Campaigns: It’s All In The Reward 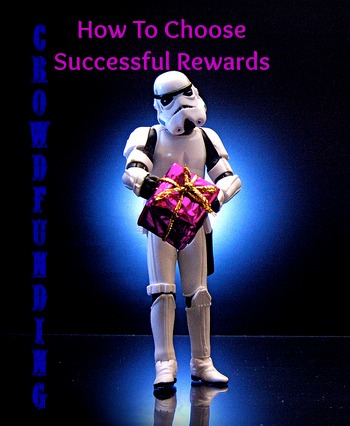 One important part of the preparation when creating your crowdfunding project is to decide on the rewards.  Offering rewards in excess of €100 will really boost your total when pledgers pledge for them.  You also need to have pledges at the €10, €20, €50 and €75 levels if possible.  For my own project, the €15 reward (a signed copy of the book) was by far the most popular.

Being Careful When Choosing Rewards

When preparing for my talk on crowdfunding the other day, I realised that choosing suitable rewards for your target market can be easier said that done. It’s one thing to work out what people might like as a reward, it’s quite another to calculate how much that reward might cost you in terms of time and money.

If your goal is €10,000 for a book or a film and you need €9,000 to produce that project to the standard you are promising, all of your rewards should be created from that project without involving significant extra cost to you as the creator e.g. copies of the book, tickets to the film, signed programmes, acknowledgements in the book, the programme and on the website.  Your rewards can essentially include pre-orders of the book or pre-tickets sales for an event. Acknowledgements aren’t going to cost you extra money but certainly hold a value for the pledger.  I can appreciate that everyone includes those types of reward and you want to be different, you want to add something extra but what?

If you offer rewards for something that is going to cost you significant money and time to create and send, you really need to be careful of your margins in offering those rewards or limit the number of them.  If your reward is for something that isn’t really financially connected to the actual project, is it really going to provide you with funds for the project itself?

e.g My ‘copy of single book’ rewards in my crowdfunding campaign were €15 and €25.  I added an additional reward into the €25 pledge to try and boost them amongst my target market of Americans. The additional reward was for a PDF booklet of 6 recipes. Yes, it will take a little time to write it up and I’ll have to make some of the recipes in order to photograph them (no problem – we love eating them). But, apart from my time, this reward isn’t going to cost me anything in terms of hard cash.

Many project creators will add extra rewards to try to persuade people to increase their pledges. It’s an excellent idea as they have already put their trust in your project and engaged with you.  However, you have to be careful those extra rewards don’t end up costing you money. For example, if you create an extra reward of a signed T-shirt for an extra €20 but the t-shirt costs you €12, there’s only going to  be about €6 (after the crowdfunding website’s charges are taken out) actually going towards the production of your book.  Will there be enough funds in the pot dedicated for the actual project?

If a reward involves you delivering a workshop, performing at a gig or teaching a course, this could be popular and is a great way to get you closer to your goal. However, if the reward is for €1000 and it is going to cost you €400 in actual costs and you would normally get €400 for the training, then (after charges), the funds for your project are really less than €200.  I’m not saying that you shouldn’t offer these rewards but you must put a value on your time and on the financial costs of delivering that reward.

It is very easy to get carried away when trying to generate more pledges. When you are trying to think of new rewards that your community will sign up for, just be careful that a) the rewards won’t end up costing you money and b) that it will leave sufficient funds for your project.

Make it manageable. If you know you will only have time for 6 workshops at €500 each, only offer a maximum of 6 – just in case they do take off. Yes, the extra funds might be wonderful but not if the provision of the workshop doesn’t give you any margin and eats into your time to the detriment of the original project.

The rewards must be seen to be of value, otherwise they won’t be pledged. However, the value doesn’t always have to be a monetary one. Keeping it creative is often part of the secret to success too.

If you are considering running a crowdfunding campaign for a project, do check out our 2-week online course this autumn.