Home › For Beginners › Twitter For Agricultural Companies – Yes or No?

I recently wrote a post on my Irish Farmerette blog that was rather tongue in cheek, all about what agricultural sales representatives need to do well in order to succeed with getting orders from farmers. From that came a conversation on twitter about how very few agricultural companies are using twitter (or indeed any social media) and those that are, aren’t using it very well at all.  The reasons I’m going to provide here regarding why these agricultural merchants should, at the very least, be using twitter goes for all businesses really.  I will also outline how they can use it effectively to make sales. 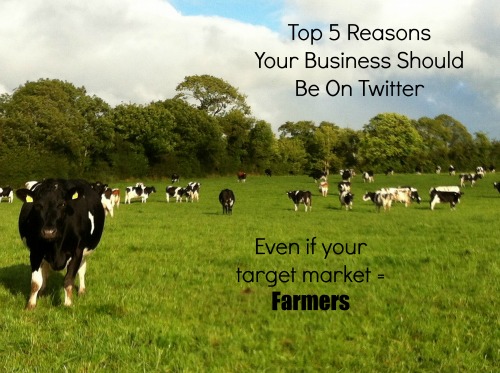 The number of farmers and farmers’ wives on twitter in the UK and US are considerable. Admittedly the number of Irish farmers using social media is a very small percentage of the total but it is a number that is growing.  Very few are blogging but a significant minority are using twitter, they use it to share knowledge, compare opinions, ask questions, have a chat and some take part in tweet chats such as #agchat and #agchatirl. With smart phones becoming more accessible and more mention in the media regarding twitter, more farmers will join, therefore the audience will grow.  Businesses can find suitable people to follow by using twitter search.

Using twitter effectively as a business is not about pushing out information like writing an advertisement. It is not about making grand statements or listing prices.  Given the harsh weather conditions that farmers have been experiencing lately, they have been discussing the lack of grass growth, the price of meal, the worth of spreading slurry and fertiliser, and offering each other moral support in tough times.  Effective use of twitter would involve  joining in these twitter conversations – not by butting in with ‘sales talk’ but by adding worth to the conversation by providing information and discussing the various options available.  It’s all about participating rather than trying to control the conversation.

#3. How To Demonstrate Your Expertise

As with blogging, twitter is where business owners and employees can show their knowledge and expertise.  It’s not about worrying that you are giving away your tips and knowledge for free – instead by sharing that knowledge, you will show that you know what you are talking about and others will seek your opinion (and your prices) when making buying decisions.

#4. The Early Bird Catches The Worm

As mentioned above, if there aren’t many of your business type using social media as in the case of agricultural merchants, if you are using twitter well, you won’t be facing much competition while having conversations with the farmers, with your target market.

Many businesses tend to be nervous of using social media, fearing that it might spark negativity about their product or service.  However, the fact is that if someone wishes to spread the word after a bad experience, your absence or presence on twitter won’t affect it. It is much better that you are aware of any such feelings by setting up alerts and being able to address any negativity immediately. Remember too, that people also write glowing recommendations of businesses on twitter too and you can capitalise on this by retweeting or favouriting any positive tweets by others.  Twitter may also show you any failings your business may have and you can then address them.

Twitter, like all other social media tools, offers considerable scope for networking, for making introductions, for building on relationships.  Start conversations on twitter with your target market and with their permission, follow up with a phone call or visit.  You may not even have to follow up, some potential customers might be picking up the phone first.

If you’d like some social media training, do contact us – we can even provide it with an agricultural twist!

If you would like to connect with me on twitter, do follow me at @Writeontrack_L where I talk about social media and Irish Farmerette where I chat about farming