Home › Crowd Funding › What I Am Learning About Crowdfunding – Week 1

What I Am Learning About Crowdfunding – Week 1

I decided to bite the bullet and launch my own crowdfunding campaign on Fundit. I’ve been writing a  book (that will be funny yet contain gritty realism) about farming for some time and although the feedback has been great and lots of people have told me they’d love to read it, it might be a different matter when it actually comes to being published.  The options available to me are to send to a publisher, just publish as an ebook or run a crowdfunding campaign to see how many people will pre-order a printed book.

The advantages of crowdfunding are many – apart from gaining funds for a project that might be hard to finance in another way, it provides free feedback. Many companies have failed with their crowdfunding attempts but that doesn’t mean that is a negative. It means that they have saved themselves working on and putting personal funds into an idea that just would not have worked. It may mean that they need to tweak or change their idea and they will succeed the next time. It’s a steep learning curve but the efforts seem to be worth it.

Regarding self publishing, there’s a considerable expense in getting 1000 or even 500 copies ready for sale and the last thing any writer wants is 500 copies gathering dust in the attic.  My thinking was that if I got pre-orders for a significant number  (it would take 400 pre-orders of the €15 signed hardback book option to reach my funding target) it would make forging ahead a much more comfortable process. It has happened on other crowdfunding projects that ‘people tuned in and spread the word but no one put in the dollars’ so crowdfunding is an excellent way to test the market.

Following on from the post I wrote last week outlining the tips I’d discovered for running a successful crowdfunding campaign, I’m going to share my ‘crowdfunding journey’ with you each week.

What I’m learning about crowdfunding:

Most of the crowdfunding advice articles recommend that you have an existing network of contacts and friends offline and online that you can tap into to spread the word as well as support you. I’ve been active on twitter now for years, have an existing facebook page and I’ve been blogging about the subject matter for almost two years. I’ve been involved in number of business groups such as a local women’s business group and social media groups such as KLCK bloggers network.

I am not good at asking people to pledge and I really don’t want to become a person who talks about nothing else for the next month. However, I have asked people to share links to the fundit page and have seen numerous shares taking place on facebook and twitter so far. Next plan is to email contacts in my email address book and ask them to share the link.

It’s a good idea too to ask people for their opinion on your intended project and it’s probably a good idea not to ask friends who either think you are wonderful anyway and won’t be analytical enough or won’t understand the process and will think you are mad, thus depressing you.  I know two wonderful people who are experienced in social media strategising and in running crowdfunding campaigns and I’m using them as my sounding boards!

From experience, giving people a ‘ready made’ tweet makes it easier for them in terms of working out what to say plus you are in control of the message. By including your own username within the tweet, you can monitor the results too. I used bit.ly to create the shortened version for the link so I can monitor the number of clicks too. I provided three tweets so they could choose their preference.

This collie dog steals the show (oops scone!) in this #crowdfunding videohttp://bit.ly/11NR96B (via@Irishfarmerette)

Funny play on the ‘American Gothic’ painting in this #crowdfunding video for a self published book http://bit.ly/11NR96B (via @Irishfarmerette)

Pre-order the book ‘Would You Marry a Farmer?’ for a great Xmas gift by pledging here http://bit.ly/11NR96B (via @Irishfarmerette)

Time will tell which was the most successful.  I intend to change their focus in another week or so, e.g by concentrating on the rewards in return for the pledges next week.

Apparently asking for retweets in your retweet will increase the number of retweets you receive. I’ve never tried this before so it seems an opportune time to try it out! 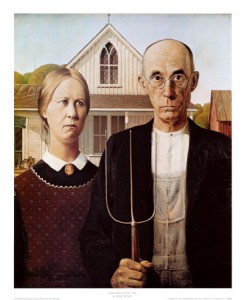 All of the crowdfunding websites seem to suggest that a good video is imperative.

Amanda and I spent considerable time coming up with ideas for the video such as incorporating a reference to the famous ‘American Gothic’ art painting, showing my various roles, including the ‘cute’ factor such as the dog and the calves but above all, showing the popularity of the blog post from which this book is inspired.

(I think Amanda did a great job of editing it too – full credit for the name North and the idea for the American Gothic goes to her) Time will tell regarding its effectiveness.

When a particular blog post gained almost 50,000 visits in a week, most of the traffic came from facebook. Someone (who was very influential) saw the link on twitter and shared it on facebook from which shares grew to over 9,000.  I have been sharing the campaign on my own facebook page and personal profile and have seen as others have shared it too.

Crowdfunding advice websites also recommend having an email list so a newsletter can be sent out. As this has been a hobby until recently, I don’t have one of these in place.

How can Linked In be used for a creative project? I’ll be tapping into Linked In later in the week so I’ll let you know.

Pinterest – Pinterest is working well for us regarding our social media blog posts so I’m curious to see how it works for this particularly as I have pinned the video. Very few repins so far.

It looks like some crowdfunding websites keep updates so they are seen only by those who have funded so far whereas those such as Fundit (the one I am using) makes updates visible to anyone viewing your project.

Personally speaking, I cringe when I see an update saying ‘We’re doing really well so far but we need another push, please tell your friends to pledge’.  I believe the emphasis should be on thanking the pledgers to date and trying to garner more enthusiasm and excitement for your project by sharing news as to how the project is going, how the funding is going, how the preparations are going towards your project. I intend to create more videos of life here on the farm (perhaps Vine videos) and share some extracts from the book. 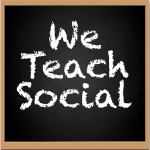 Crowdfunding advice also includes including a variety of rewards from free tickets to the show, a copy of the book, 5 copies of the book, your name on the credits or the acknowledgements. However, they do suggest being more creative too as well as giving good value for money particularly when you are looking for larger rewards. My rewards include social media online courses from our selection at We Teach Social (I haven’t emphasised these yet as we’ll be adding to the selection later in the week) with a copy of the book, adopting a dairy calf and receiving bi-annual updates, come and visit us and see your calf and have afternoon tea, and allow us to create a blog about your own adopted calf that will be updated once a month (there’s only one reward for the blog option!)

So far people have pledged for copies of the book, it is good to see the pre-orders coming in.

As I said above, I’ll be sharing my steep learning curve with you each week. Do let me know if you are thinking of organising a crowdfunding project or if you have organised one in the past. If you’d like to keep an eye on my progress, you can do so on my Fund It page.