Ten Things You Must Do During Your Crowdfunding Campaign

Following on from my post detailing ten things you must do before you launch your crowdfunding campaign, this post is going to concentrate on those essentials to do during the campaign with some tips on what to expect too. 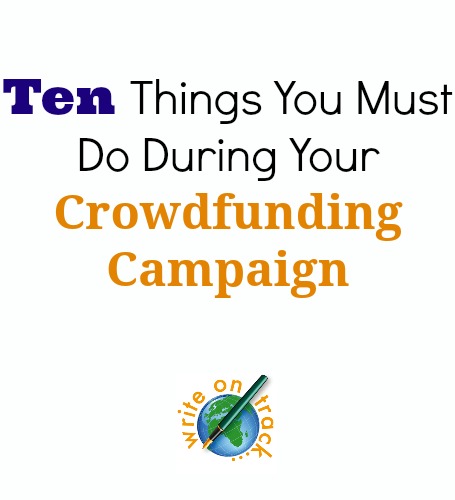 Your pitch is ready, the video is just about perfect, you can’t wait to get started, you’ve done the preparation and the crowdfunding platform organisers email you to confirm that your crowdfunding campaign is now live. The timer has started and you have your limited time zone to raise as much money as you can for your project. Campaigns, no matter how wonderfully creative they are, do not produce success on their own. Many successful campaigns might make it look very easy but every single one takes a huge amount of effort behind the scenes. Here’s ten things you should do to maximise your chances of success.

1. Ensure your campaign gets pledges immediately-  Believe it or not, it can happen that campaigns sit there, pledgeless and lonely, for days and weeks. No stranger to a project is going to pledge if no one else has invested – they will just be suspicious as to the value offered and the authenticity of the project. Ask good friends to pledge once it goes live – ensure they know how important it is to you.

2. Email your contact lists / newsletter list –  It’s not enough to ask them to pledge, you need to raise their enthusiasm in your project by communicating your passion and the added value in the rewards. By making the rewards something they would love (either as a gift for themselves or for a friend), they will be much more likely to pledge and thereby, feel they are part of the journey which means they may share the story. You do need to ask people (those you know /who know you) to pledge, it is not enough to ask them to share. Yes, I know it isn’t easy,  it doesn’t come naturally to most of us and I have to admit I didn’t do enough of it in my own campaign but if people are asked in a nice way and good rewards are offered, they are much more inclined to say yes.

3. Tweet – Twitter is one of the most effective social media platforms to use during a crowdfunding campaign (at least half of my pledges came from twitter followers). You can use tools such as followerwonk to determine your key influencers. You can follow those who might be interested in pledging your campaign, you can send them tweets and engage in conversation. Others can retweet your tweets to share the appeal and pledgers can announce their support while incorporating your username and the link to your campaign.  I recommend scheduling a number of various ‘call to action’ tweets but you also need to be conversational about your activities. People should not see a list of ‘call to action’ tweets when they look at your timeline, they should see a mixture.

4. Blog & Facebook – Writing a weekly post about your crowdfunding campaign progress plus outlining how work for your project is progressing will keep it in people’s minds. Share those posts to facebook. I recommend posting two updates per day to your facebook page, one should summarise the crowdfunding progress and the other should be like your normal updates. If you have a good community on Pinterest, then share your images and videos there too, ensuring they are visually attractive to maximise the chance of repins. If you’re planning on making a film, it would be a good idea to create videos during the campaign and share them from Youtube. Use whatever channels your target audience are using.

5. Send Press  Releases – Some successful creators found they only got press coverage once the campaign was over (and successful). However, I managed to get coverage in very relevant and national newspapers. It may not have hugely increased the number of pledges (as people tend to be slow to pledge from an offline source) but it certainly gave the campaign more credibility and it was good to share the coverage on the social media channels.

6. Have Support – Running a crowdfunding campaign is exhausting – between continually clicking refresh on that page, to tweeting, to thanking people, to writing and sending press releases, sending updates, writing blog posts, doing your normal job and it can be very easy to become disillusioned and exhausted during the ‘normal’ lull in the middle. Never despair – it isn’t over until the last hour and many people do leave it till the last minute. However, it is important to have support, have someone there to advise you, to encourage you, to talk common sense and remind you to keep momentum up.

7. Popularity Means More Success – The crowdfunding sites tend to feature some of the campaigns on their home page for various reasons – usually because they are hugely popular.  If a campaign is doing well, it is gets more prominence for a few days.  By concentrating your efforts for a few days, it will really benefit your campaign in more ways than one. Of course, a particularly clever idea or compelling video will become a featured project too.

8. Modify Rewards – some sites (e.g. Kickstarter) permit you to add on additional rewards during the campaign, others don’t, although you can add it in an update. Evaluate which rewards are doing well. If you are doing well in terms of getting pledges but they are all for low-value rewards, you may find you are slow getting to your total. The options are to alter your rewards so that more people opt for the higher-value reward, so your existing pledgers increase their pledge or rely on huge numbers of pledgers.

9. Have Fun & Be Positive – Remain positive throughout, outwardly at least. Have as much fun as you can too – enjoy chatting with pledgers and potential backers.  You only have a designated length of time to raise your target so give it you all.  Embrace the countdown to the last minute and you might be surprised at the response. Mine achieved the target just before midnight the night before the deadline and I was up until 2am responding to congratulatory tweets, texts and messages. It almost felt like I had won an election as there were so many people that had been hitting refresh on the project page too.

10. Say Thank You – Don’t forget to thank your backers – both in a general update and if you know them, thank them personally.  Make them feel that they are part of the success of your project as if it wasn’t for them, it just wouldn’t happen. Remind them the campaign is ‘all or nothing’ too so they will encourage others to support it.

Next up – I’ll be outlining what you should do once the campaign is over.

Do let me know if you are thinking of running a crowdfunding campaign soon.

Tagged with: crowdfunding, how to succeed with a crowdfunding campaign
Posted in Crowd Funding