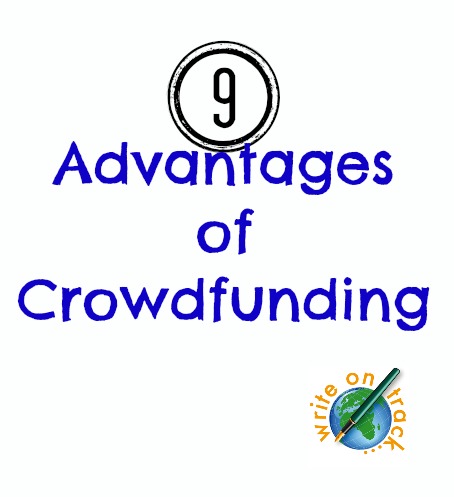 When one considers crowdfunding for a project, one automatically thinks of the financial benefits – the fact that a successful crowdfunding campaign will lead to sufficient funds to make a dream a reality, to make a project become real, whatever it may be. However, while finance is a huge benefit, there are other advantages to crowdfunding too.

Whether you are looking for €1000, $10,000 or £100,000 to make your project a reality, crowdfunding makes these goals possible – if the project captures people’s desire.  Although you may be providing goods to the value that you receive, the fact that you are making pre-sales means that there is less risk involved in going to market plus you have the backing to make it possible – all without having to visit the bank.

Whether the campaign succeeds or not, crowdfunding is a wonderful way to test the market and see if there is interest in your product or project. A failed campaign is not necessarily negative as long as you learn from it. Perhaps the rewards are not desired, perhaps the product needs tweaking, maybe the pricing is wrong but you will learn from it and find out what works best – long before you risk significant financial investment.

As many of the crowdfunding platforms encourage interaction and one can interact with backers on social media in any case, this method gives great scope for getting feedback from others – whether they like it, whether they’d like to see some alterations, thoughts on costings and more.

If your project is interesting and novel enough, it is entirely possible that your campaign will be featured in the press – once you send press releases to interested journalists.  Even if it doesn’t result in a significant number of pledges, once your project is completed and in the press again, the new coverage will remind interested readers and listeners. I found that the same journalists revisited the story once the book was published.

By using social media and press coverage, so many more people are going to know about your new business, whatever that may be.  People buy from people and they will have got to know you well during the process as long as you engage with them on social media and provide updates via your crowdfunding campaign. I sold 750 copies of my book in the three weeks before Christmas – all down to social media, a couple of newspaper mentions, 3 radio interviews and of course, the backers who told others about my book.

For products to really succeed, they need people to like and enjoy them, to want to talk about them, to tell their friends about them. If your backers feel passionate about your project and are happy with the quality, they will feel part of the journey if you keep them informed. They will then tell their friends and followers, in effect, they become your brand ambassadors. I found that many backers, having received their copy or copies of my book, went on to order more of them for gifts as well as talk about it on their blogs / facebook pages and twitter.

7. No Need for Loans

While I’d recommend that you put some of your own money into your project (I think backers like to see the creator making some of their own investment), this doesn’t have to be a huge amount. While the amount of work needed for a successful campaign is significant, it is less painful than asking a bank manager for money – and you won’t have to make monthly repayments. Crowdfunding isn’t free money, you have to give rewards of value but you can look on it as gaining pre-sales.

Although crowdfunding campaigns can be relatively long, most tend to have a duration of a month. My own was 35 days and I felt it was long enough to provide results without dragging on for ages.  Although you have to put preparation into the campaign, you can achieve so much in just a couple of months – pre-sales and sufficient finance to make your project become a reality.

Succeeding with a crowdfunding campaign is easier said that done with only 44% of Kickstarter and 73% of Fundit campaigns being successful. If you can raise a significant amount of money via crowdfunding, it gives you and your project credibility and kudos.  I have to admit that I was amused by the number of people that seemed genuinely surprised with the quality of my book when they received it but that was probably also due to the fact that I hadn’t disclosed so much during the campaign. Being a successful crowdfunder is something to be proud of  and will stand you in good stead.

There you have it, nine benefits to crowdfunding – if you have been wondering whether to take the plunge or not, I hope this convinces you to go for it. If you would like additional help, I am running a 2 week online course on crowdfunding over at We Teach Social in March.