Niamh’s crowdfunding project started about a fortnight before mine ended and I was immediately interested in it, partly because I’ve read Niamh’s Eat Like A Girl blog on occasion and love bacon, partly because it is on Kickstarter and I was interested in seeing how it might differ from my Fundit campaign and partly because it is also for a book, albeit a very different book to mine. Bacon Project is going to be a cookery book focusing on the various sweet and savoury dishes you can make with bacon. 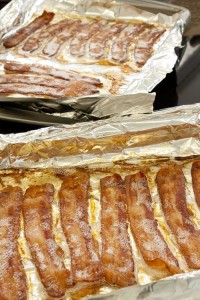 It’s wonderful to tell you that Niamh’s project was very successful, reaching its goal of £20,000 the day before the deadline and achieving €24,611 from 740 funders when the clock stopped. Niamh is a well known blogger, has an engaged following on various social media channels and published her first cookery book a couple of years ago. I was delighted when Niamh agreed to be interviewed.

1. Why have you decided to self publish this book?

I wanted to do something fun, different and independent. In the past two years I have met some particularly inspirational people who have published their own books and their story inspired me to pursue this route.

2. Was Kickstarter the obvious choice of crowdfunding platform for you or did you consider any others?

Kickstarter was the one that appealed to me, but I did look around first.

3. What do you think of the ‘all or nothing’ rule of Kickstarter?

Terrifying but important. Other crowdfunding platforms for publishing don’t have this and I wanted that urgency. I also really wanted to get started and this seemed the best way to do it.

4. You have a great community behind you – between your blog, facebook and twitter. Was that significant for your success? Having a book out before must have helped too?

I wouldn’t have done this without that community support – they were the majority of the backers. Having a book out did help as people liked it and were waiting for the second one. It also proves that I can write one.

5. You got a great start in the first week and then it seemed to lull, ending with a very impressive surge in the last week. Did the lull concern you or were you expecting it? ( I noticed you weren’t tweeting so much about it or sending updates in the middle)

I was expecting the lull but it did concern me, even though I didn’t want it to. I deliberately didn’t tweet about it. For the first week I tweeted once a day and then let it quieten for a bit before building up to a big push.

It wasn’t effective for Kickstarter but I started it for the project in the long term so that it could have a life of its own. @eatlikeagirl will still be the main conduit.

7. One huge advantage of Kickstarter (in my opinion) is that you can be reactive and add in new rewards and adjust them if necessary. Do you think the extra rewards in the final week would have had the same effect if they had been included at the beginning of the project?

No, I think it is really important to add later. Lots of people upgraded their pledge to get the bacon box and it brought lots of new people in. I studied successful projects before I started and realised that this is what they did.

8. The bacon boxes seemed to be very popular – are they going to be a lot of extra work for you in the coming months.

They will be a lot of work but I had always factored them in. They are an important part of this. Where I have had success in the past is by getting out there: at my market stall in Covent Garden, at pop up dinners etc. People like real things and to taste your food.

9. Did you find it was a lot of work during the month? Was it a rollercoaster?

It was a lot of work but that is fine. It was mentally very draining. I was quietly confident with spikes of intense worry. It wasn’t a rollercoaster. I was always hopeful but never certain that I would make it.

10. In your opinion, how important is a good video?

Very important. Mine could have been a lot better.

11. Well done on your interview on the John Murray Show – did you get other press coverage? Did you notice a surge in pledges after the press coverage?

Thank you! They were very good to squeeze me in and it was important for the final push. I didn’t have a PR or press plan but I was interview by The Irish Post and the Evening Standard did a piece on me mentioning Project: BACON at the end. I didn’t see any link between these and funding activity but you never know.

Niamh has also written a post outlining her experience over at Eat Like A Girl which makes for interesting reading too ( I was relieved to see we shared many similar ‘I should have done that’ moments)  I’ve learned a lot from looking at the differences in  our different ways of approaching our projects and also the capabilities of the two different crowdfunding websites too.

I’m doing a talk based on my crowdfunding experience at the next KLCK Bloggers Network meeting in Portlaoise on 9th September. It’s free to attend, you can see more details and register on facebook here.

Tagged with: crowdfunding success, eat like a girl, how to crowdfund, kickstarter
Posted in Crowd Funding