Creating A Compelling Crowdfunding Campaign – I Interview Creator of Pogwin

Crowdfunding is a really interesting concept and is becoming increasingly popular – it works by creators presenting their community, creative or business idea on a crowdfunding platform, providing rewards in turn for pledges and ask people to pledge money to make it happen, quite often asking them to pre-buy a product and wait a number of months for delivery.

I first met Jamie when he delivered a talk introducing the concept of crowdfunding as part of an ACT Ireland Wales conference. As I sat there listening to him talk about the crowdfunding campaign he had assisted, a germ of an idea came into my head regarding the potential of using crowdfunding for my book idea. Would crowdfunding help me to test the market and see if there might be genuine interest in my book? Would it help me to raise finance so I could minimise the risk of printing numerous copies? Might it help me to increase brand awareness of the book? I spoke to James about my ideas and he was very encouraging. He told me afterwards he knew I was determined to do it but I think even he was surprised when I launched a campaign just seven weeks later.

I’ve written some blog posts about the steep learning curve I experienced when running my crowdfunding campaign. Coincidentally, I was interviewed recently about my crowdfunding adventure, sharing tips from my experiences. My interview, along with two others, is available on this podcast.

Jamie has now launched his own crowdfunding campaign for a beautiful picture book and I am delighted to bring you an interview with him, revealing his inspiration and some insight into the whole process.

Hi Jamie, many congratulations on producing a beautiful book, it looks like it is the fruit of many many months of hard work, love and attention to detail. Do tell us about the inspirations for the book and the creation of Pogwin.

The inspiration was a roundabout! I wonder if anything so mundane has ever inspired a picture book before? The roundabout is on the outskirts of Neath in South Wales and in its centre is a large grove of trees. We see this quite often on our travels and Chris imagined that, hidden amongst the undergrowth is its only resident; a quiet, solitary character, very comfortable in his own skin.

The creation of the book is collaboration between the two of us. We both developed the story outline. Chris is the illustrator and I’m the writer. The whole thing is told through Pogwin’s words; a strange rhyming babbling language that reflects what he’s thinking at every moment. 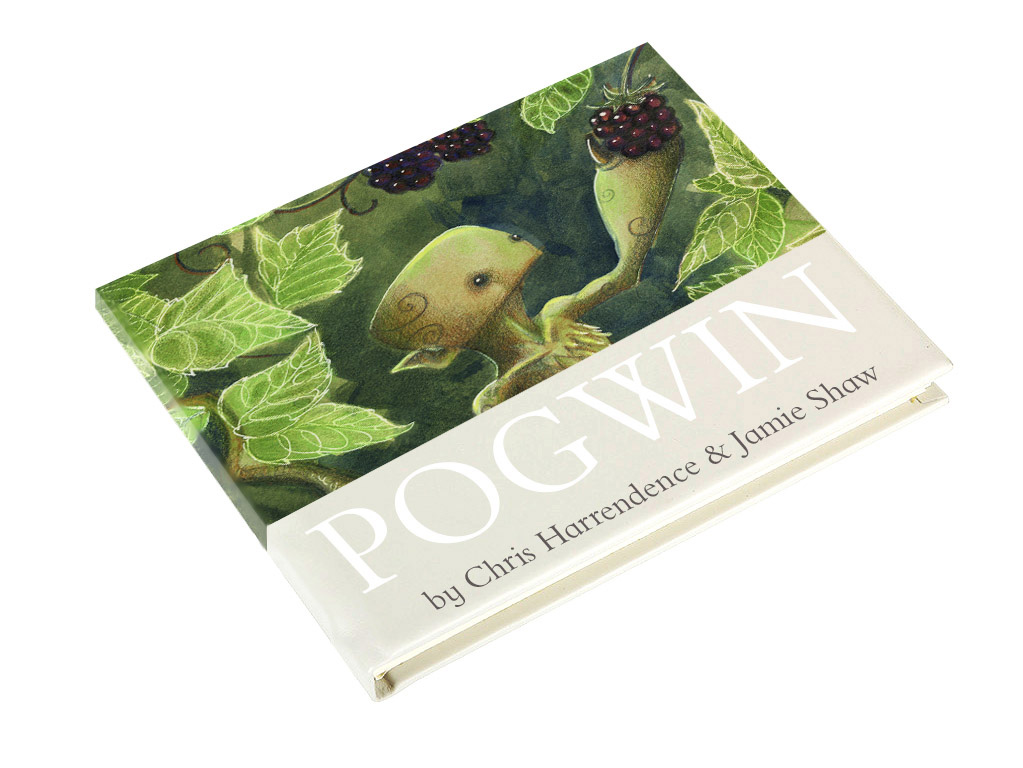 We’re both passionate about conservation. I’ve noticed too many urban developments that have just quietly flattened ‘scruffy’ woodland and built on it. Who knows how many creatures like Pogwin have been made refugees! Education is the most powerful weapon that you can use to change the world and picture books help educate the young. Pogwin is our attempt to capture the imagination of children and also introduce them to problems with deforestation and unrestrained development. We are also planning to plant trees if we are able to raise enough funds to publish the book. We have 7 acres available! Please help support by sharing.

Why have you decided to crowdfund? Are the reasons more than monetary?

Traditional routes to children’s publishing are difficult with many gatekeepers. We want to connect directly with the audience for the book. We’re keen to develop more books in the Pogwin series and retain creative control along the way. Kickstarter is more than just a site to attract funding; although that’s a crucial part of it! It’s where we hope to connect with a community. We’re also making friends across social media platforms such as Twitter and Facebook.

Writing a book for children is incredibly difficult as you have to please and interest both the children and their parents. Did you find it difficult to write?

I love writing Pogwin and I don’t find it difficult at all. Maybe that’s because I identify with the little chap. People who know me would laugh at that.

What is difficult is to write well! I often go back to the things I’ve written days before and edit or discard. It’s part of the process. 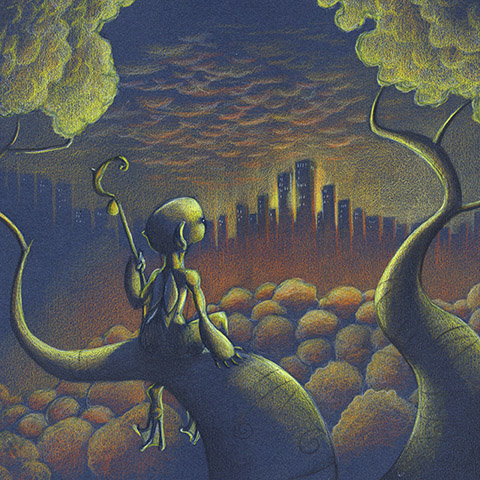 Many congrats on achieving £1548 in just six days. I know there’s some way to go but that’s a great start. What methods are you using to try and secure pledgers? Are you trying to get press coverage?

There are so many approaches we are taking. The main channels are Twitter and Facebook. On Twitter we are posting regular content that we hope is interesting to followers and the wider world. Careful use of hashtags are important. Our main tweet is pinned to the top of the page. We have asked for retweets and sent direct messages; this has lead to backers. I’ve joined a number of relevant Facebook Groups relating to children’s publishing and also the environment. I regularly post to these and this have proved successful.  I make sure the timing of these posts are right though. It means a late night if we want to attract the attention of our friends in the USA.

When I ran my crowdfunding campaign, one of my aims was to test the market. I didn’t really have anything to show potential pledgers apart from a popular blog post. When I look back, I wonder how  I succeeded as I didn’t have a front cover to show, I didn’t have any illustrations not to mention extracts from the book. I’m wondering how on earth I managed to raise €6,000 – pure determination perhaps. Your campaigns looks very polished in comparison, partly as your book looks ready to go to the printers. What made you decide to wait to launch the campaign at such an advanced stage? (Incidentally, I think it’s an excellent idea and know it will pay off for you.)

We both write and illustrate so holding us back from doing the creative work is difficult! That’s the bit we love. There’s room for changes to the storylines and some of the illustrations. I think it’s important to leave space for this for after the campaign has finished because feedback may influence our creative direction. We’re not creating by committee but we will be influenced by our potential readers and will respond if we feel that’s the way to go.

You had something amazing; a great idea for a book and a large connected following. We’re not so connected so we’re relying on the message getting out. It’s essential. The more people share the better. Hint to your readers : )

It was more the platform. I have some experience of working on Kickstarter campaigns so that has proved useful. I also wanted a to work on a publishing project, a new thing for me, and test the market via Kickstarter. ‘All-or-nothing’ is good in that it forced me to develop a carefully considered income and expenditure forecast.

The obvious reward for a campaign for a book is a copy of the book – did you have difficulty in coming up with rewards for higher and lower values? What is proving to be the most popular reward?

It wasn’t too difficult as there are established structures for reward tiers for children’s picture books i.e. providing limited edition prints of illustrations and even offering original artwork – which I’d highly recommend people look at! Chris’s illustrations are beautiful.  The most popular reward is the hardcover book but the lovely slip-case version is popular too. Both would make a great gift. One fun reward for all the tree lovers out there is that we will plant 100 trees if we reach our target. It’s in keeping with the theme. I have seven acres to play with so we’ll start our own copse just without the roundabout. 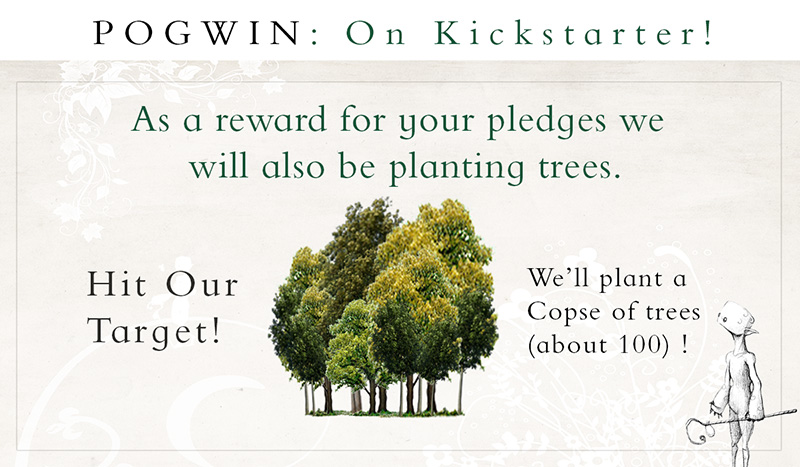 Have you had any influential people support you and has their recommendation resulted in more pledges (I noticed a tweet from someone with 90K followers last night)?

That’s an interesting story. Zach Weinersmith (@zachweiner) is a gent. He successfully funded a chillden’s book called Augie and the Green Knight on Kickstarter. I emailed him for advice and asked him what he thought of the campaign. He thought the book and the pricing looked good. What I learnt from him was that he was very well connected during his campaign, much more than we are. So we are working on it! This project is a fantastic way to learn and we’re working hard on those connections.

I know you have helped others with their crowdfunding campaigns in the past, is there anything about running your own campaign, as yet, that has surprised you? Is it more work than you had anticipated? 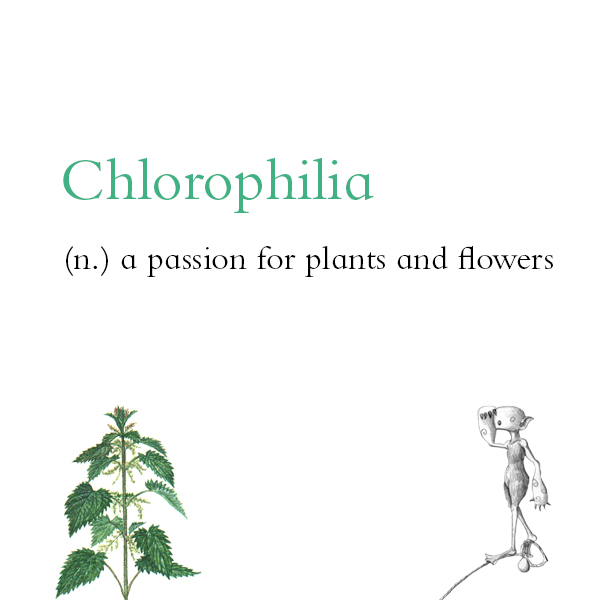 There you have it. Less than a week into their crowdfunding campaign and Pogwin is doing well having secured $1548 from 36 backers. The grand total in this ‘all or nothing’ campaign is £7,500. I suspect you will pledge for this book planning to give it to a child (son / daughter / niece / nephew / grandchild) as a gift but you just might end up keeping it for yourself! It’s a great example of a well planned and executed campaign – beautiful images and graphics, snapshots of the writing, clear indications of the quality and a video which shows the product and the two creators. What are you waiting for? Go and have a look at the wonderful Pogwin.