Benefits of Social Media & How To Get More Press Coverage

I am often asked for the benefits of social media by those considering trying twitter or contemplating writing a blog for their business and last week at the Ploughing Championships (a huge 3 day event here in Ireland) was no exception. We had many people asking us for the benefits of social media, wondering how they could utilise it for their own businesses as well as the farming industry.

There are many benefits to social media and to give you an example of how it can gain free press coverage and profile for your business, I just want to share with you the few examples of PR we gained last week at the event.

Blog Success : Farming Independent (National Newspaper) – This was achieved because the journalist had contacted me during my crowdfunding campaign. She had read about it on my Irish Farmerette blog, contacted me and featured it. I’d mentioned how we were going to be teaching farmers how to tweet at the Ploughing and she asked me to send her details which I duly did. 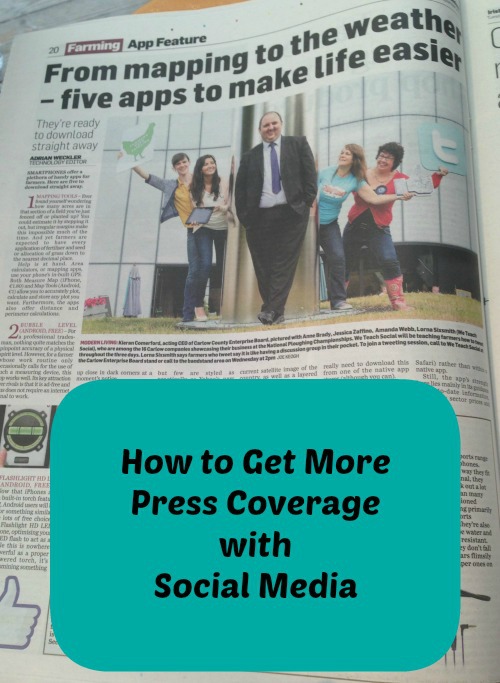 Agency Success: Daily Mail (National Newspaper) The Carlow CEB hired a PR agency and following the sending out of press releases, the Daily Mail got in touch and included this in a full page write up on the event.

I was interviewed for three different radio stations on the topics of  women in agriculture, my upcoming book and the teaching of social media with We Teach Social. The fact that I am an unknown author (apart from my crowdfunding campaign and my social media activity) and the book is being self published and yet I was being contacted for interviews was a tremendous confidence boost.

Blog & Twitter: 2FM Radio (National) – I was contacted by telephone to ask if I would go along for a 5 minute interview. As far as I can make out, a twitter contact (a journalist) had mentioned it to the research team and they had checked out my blog. It was great craic having the banter with Hector about the trials of being married to a farmer.

Blog & Twitter: Midland Radio (Local) – I was asked to speak about the role of women in agriculture as one of a panel of three. A version of ‘Loose Women’ but based on farming. This also came about because of my online presence.

Twitter: BBC Worldwide – This hasn’t been transmitted yet but will be sent out this week. I was asked about my book and the various benefits of social media for farmers. This came about as the researchers asked a twitter contact if he knew someone who could speak about social media, isolation and other farming issues and he thought of me. I’ve no idea how they will edit the piece so it will be interesting.

Have you received press coverage because of your usage of social media? I’d love to hear about it.