8 Things I’ve Learnt About Getting Press Coverage For Books

Self-publishing is a huge learning curve. After all, not only do you have to learn how to write the best book you possibly can, without those rookie 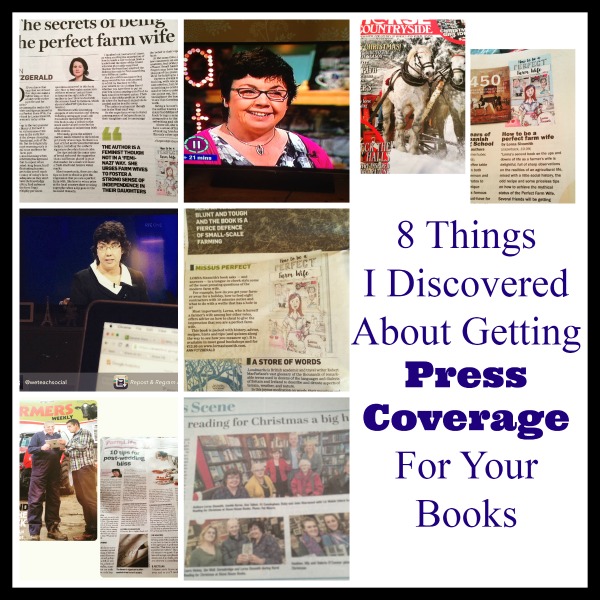 mistakes, you also have to find the best editor and cover designer you can, format your book, upload it to Amazon and others, probably print the book, get it into shops and yes, market your book.

Having self-published my second book four months ago, I’m reasonably satisfied with the press coverage achieved since then (two TV appearances, 6 features / reviews / interviews in national papers, a review and an article published in UK papers, 2 half pages in local press, 4 national radio interviews and probably the same number of local radio interviews). Sometimes I’m a little hard on myself and feel I should have done better but then I cop on to myself when in discussion with other authors. It also helps that I’ve just discovered that various pieces of coverage I thought would happen before Christmas will now be spread over the coming months.

They say that a person needs to see or hear of a product on average seven times before they will purchase. If your book is in a popular genre and published traditionally so it ends up on one of the central tables in a bookshop, particularly if in a promotion, this should increase sales. But what if your book is tucked away with just its spine showing on one of the many crammed shelves (and yes, even getting self published books to that location is a huge achievement so pat yourself on the back), how can you get more press coverage for your book so not only will more people buy it but the bookshops will keep it in stock. Here are eight things I’ve learnt while gaining more and more press coverage for my books.

Timing is hugely important and you should always send press releases for inclusion in seasonal gift guides or publications earlier than you think you should! Journalists and editors prepare material for seasonal events much earlier than you might expect. I contacted one farming paper about getting my book in their Christmas gift guide and it had already gone to print! They did accept an article from me instead but it just shows how long the lead times can be. It’s probably getting too late now for some St Valentine’s Day gift guides for example but for those of us with a Mother’s Day in March, start thinking about suitable publications.

The genre of your book may help you decide on the best month for publication (if it is a light holiday read then June might be the best month) but remember that if you are publishing in November, it can make it more difficult to get pre-Xmas press coverage as there are so many other similar stories out there. How can yours stand out?

Journalists are busy people so sending a tailored press release that needs very little tweaking before going to print will increase your chances of success. Try to tell stories within the press release too, don’t just make it all about ‘Author X has published a book’. Reveal interesting information about the characters in the book or topical and interesting research you discovered while writing it. My most successful press release for my first book Would You Marry A Farmer? was ’5 Ways To Find An Eligible Farmer At the Ploughing’ – it was topical for that time of year (September is the month for the biggest agricultural show in Ireland), it was good fun and it probably made a welcome change from many of the other farming topics floating around.

Don’t forget to have high-resolution images of your book and a good quality photograph of yourself available to send to journalists as they won’t have time to wait, they always need photographs immediately. You can go one step better and have a section of your website dedicated to a media kit for journalists, complete with images in different sizes and blurbs of varying lengths. I included a Q&A in my media kit too.

Can you collaborate with other authors to arrange a launch or event or if your book has a similar theme to something newsworthy, use it. What do I mean by that? As my book are farming related, I launched my second book in time for Ireland’s biggest 3 day agricultural event and will be doing the same this year for my third book. I heard of an author who provided talks at her local library and cinema as her suffragette themed book was topical when the Suffragette film was released. I collaborated with six other authors and a local bookshop and we had a ‘rural reading’ pre-Xmas evening event where readers could meet authors and purchase their books. Apart from the sales on the evening, we were all interviewed in a full one hour farming show on local radio the previous evening, mentioned in a national newspaper and received a half page of coverage and photos in the local paper two weeks later. The bookshop owner told me that the sales from the press coverage continued for weeks.

Things change for editors too, so being promised space on a certain date doesn’t necessarily mean it will materialise on that date. You just have to go with the flow. My recent book is being reviewed in a national newspaper. Initially it was to be before Christmas (perfect for Christmas sales), then the new year and it hasn’t happened yet. It will happen though and maybe it will cause a nice surge of sales for Valentine’s Day.

A daytime TV show had contacted me in November and seemed really interested and then I heard nothing so I presumed they had changed their minds. Far from it, I heard from them last week and they’ve been beavering away with lots of ideas for content so I’m now going to be featured in February.

I know that sometimes some press coverage might not seem ideal but unless it is of a type that will do you more harm than good, always say yes when contacted by a journalist. Two years ago, I baulked when a journalist asked me if I would like to be featured in a popular glossy women’s magazine. Yes, I was thinking of the close up shots of me in my kitchen and sitting room and although I didn’t say no, I delayed things and the journalist moved on to other things. Just say yes and worry about the details afterwards. I currently have a to do list as long as my arm as TV cameras are coming on 12th February and yes, it starts with ‘eat less’.

Always remember to contact them afterwards (a quick email is fine) and say thank you for the coverage.

Getting a feature in a magazine or even an television interview does not mean that your book is going to fly off the shelves. If it is close to Christmas, yes, sales will be good but at other times of the year, it’s likely to just be a small surge. Getting press coverage is not a magic bullet for huge sales but they all add to your profile. People may not buy the book the first time they hear of your, or even the second or third but if they keep hearing good things about you, they’ll pick up your book before they pick up the books either side of it.

7. One Leads To Another

It’s amazing how one piece of press coverage will lead to another. After being interviewed on morning TV last year, I was contacted by a number of local radio stations around the country and a couple of magazines too. A TV interview doesn’t just provide a surge in sales, it increases brand awareness and gives you and your book kudos too. After all, if it is interesting enough to be on national television, it’s good enough to be on people’s bookcases. Even local radio interviews can lead to newspaper coverage so keep at it.

Accept interviews or coverage on any topic related to your book. Partly because of my outspoken opinion and partly because I used my social media platforms (blog, Facebook and Twitter) to express them, I was interviewed on national radio about a recent farming organisation fiasco (my books are about farming). I then received an invitation to go on television that evening, to sit on the panel of the Prime Time programme. Yes, I was nervous and apprehensive. This wasn’t sitting in an audience, this was the presenter, me and three other panelists on live television but I went for it (yes, I was very grateful for my experience of being on the daytime TV3 Midday panel a few times) and it went fine. Interestingly, I was then contacted by a TV programme who are going to feature me later in the year.

Yes, it is true that it can be difficult to get a self-published book reviewed in a newspaper or magazine but that doesn’t mean it’s impossible. Don’t be nervous about contacting book reviewers or editors of relevant publications. It won’t happen for you every time but that doesn’t mean there is something wrong with you or your book, it just means it isn’t quite right for their publication or they’ve been flooded with other ones.

I contacted the books editor in an Irish woman’s magazine and was delighted to get the response that she’d feature it but it wouldn’t be for a few weeks, was that okay? Of course it was. I also contacted two or three rural / farming type magazines in the UK, one has reviewed both books and also interviewed me for an article on publishing.

And a bonus point – Trying to get publicity for your book is time-consuming, it will take many more hours that you think. I know I’ve often thought to myself ‘oh, now that magazine has featured me, that proves it works so I must contact others’ and yes, it sits on my to-do list for quite a while. Don’t beat yourself up about it thinking ‘oh, I should have contacted x and y and z’. Do what you can and celebrate the press coverage that you do manage to get. You’re not a PR agency, you’re a writer so allocate a realistic amount of time each week to your marketing and then draw a line under it.

Here’s the summary in an infographic:

Best of luck with getting more press coverage for your books. It’s not necessarily easy but is so rewarding when it works out. If you have any questions or comments, please do write them below in the comments box, I’d love to hear from you.

If you are an Irish self-published author, do enter these awards. I’m definitely going to have a go.

Something else that may be of interest to you – I’m taking part in a blab on 29th January (4pm GMT) and I’ll be answering lots of questions about independent publishing if you would like to watch or join in. 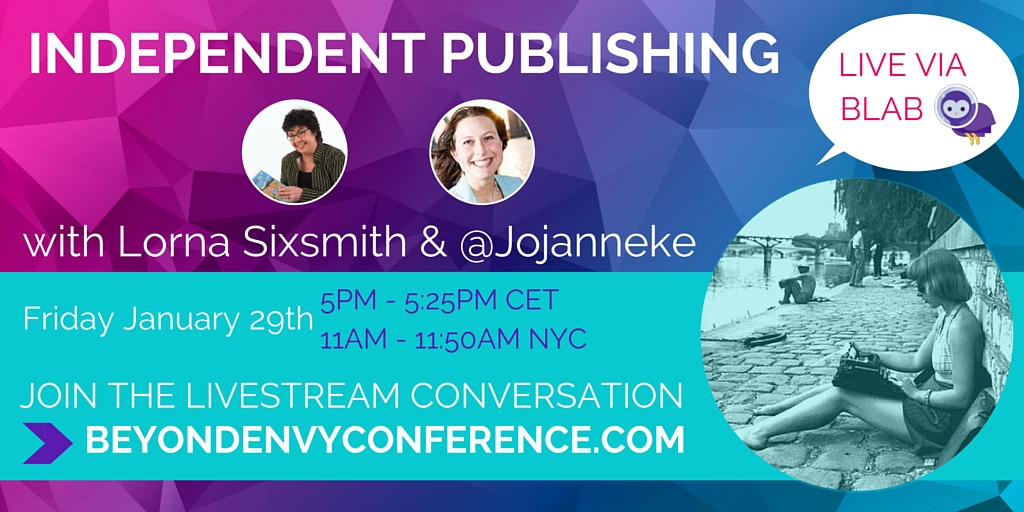 And last but not least, our Instagram for Writers eLearning course starts on 15th February and runs for three weeks. If learning how to use Instagram has been on your to-do list for a while, do book in.