Blog Awards Ireland – The What, Who, Why, Where & How

If you write a blog, be it personal or business, I do hope you will enter it in the Blog Awards Ireland awards coming up in October.  The nominations are now open until 16th July, you can nominate your own blog or place this button in the sidebar to ask others to nominate you (see instructions here if you’re not sure how to do it) and after the 3 rounds of judging, the 2012 will culminate in a gala dinner awards evening in the Osprey on October 13th.

There are 30 categories to choose from and you can enter your blog in more than one category so do have a look through and decide on those that are best suited to your blog. Entry to the Blog Awards is free. Do have a look at the general judging criteria to guide you in improving your blog over the coming weeks and don’t forget about the ‘Best Blog Post’ category too which will be judged by public vote. The other 29 categories will all be judged by independent judges.

Tickets for the event will soon be on sale but you don’t have to wait until then to give yourself a chance of snapping up a pair of tickets as we are having a competition for 2 tickets and a night’s accommodation at the Osprey.  Don’t forget to like the Facebook page too.

Why enter the awards?

From having being in the finals in previous blog awards and social media awards, I can vouch for it being a fantastic feeling to see your work recognised on a national level. So many of us put so much passion, enthusiasm, talent and hard work into our blogs that it is great to see that being recognised.  Being in the finals (and also being shortlisted) for an awards can generate significant local and national press coverage for your blog and for your business which is, of course, also free. 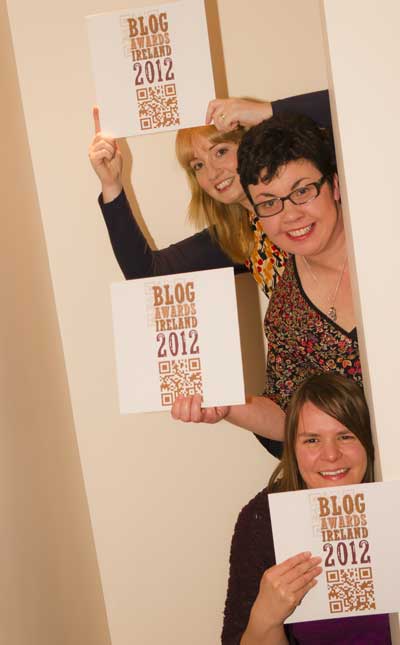 Why have a blog awards?

Beatrice, Amanda and I decided to organise the blog awards for 2012 last autumn. (The Irish Blog Awards ended last March after a very successful six years and they were not going to be continued). Being passionate about blogging and having organised local networking blogging meetings for almost 18 months, we felt that Blog Awards Ireland would be a challenge that we would enjoy and succeed with running well. You can read more about our reasons in this blog post too.

The nominations have only been open a week and so many people have entered already, put buttons on their blogs and written blog posts about the awards that it really feels that it is taking off.  We have so much planned – both in the run up to the awards and for the night itself – that we know it is going to be a fantastic event. Yes, there’s a lot of work going on behind the scenes and there’s also a lot of fun too.

We hope that you will enjoy the run up to the blog awards too and that lots of people will join us on 13th October for a wonderful night.